Rookie.
I am experiencing sporadic color changes of both single pixels and entire figures.
I am looking for recommendations for controller modifications to make to get through this season.

The power supply is connected to the same AC outlet as other ‘dumb’ exterior lights.
The ‘dumb’ lights include a set of LED net lights set to a ‘fade’ effect.

From what I’ve read so far, I might need to add a resistor on the data out from the level shifter?
Recommendations?
Thanks!

I think that adding a small resistor (between 33Ω and 330Ω) is a good first step at least. I think you should also consider switching level shifters - it is pretty well documented that many i2c shifters are not fast enough for use with wled. You might try SN74AHCT125N, as recommended by Aircookie here. They’re cheap enough that it would be trivial to swap one and test it out!

(Edit: If you do go this route, be mindful of the “A” in the part number - a similar shifter is made without the “A” which is slower and less desirable).

I added 56Ω resistors on the data lines (on the boards right after the level shifter). It stabilized the figures when there was no candle effect on the stable segment but there was still plenty of ‘noise’ if the effect was turned on.
I’ll revisit the design after the season is over.

I guess you already visited this page : 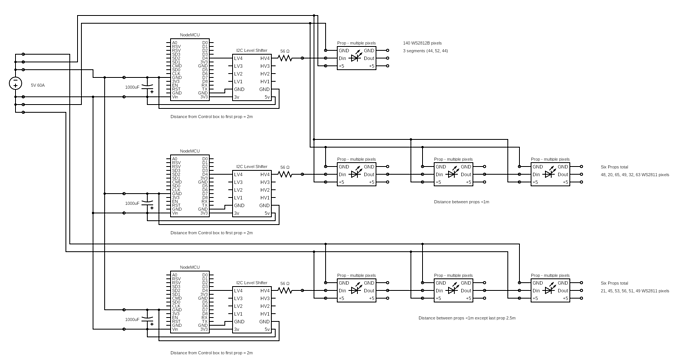 circuit1780×940 35.8 KB
Yes, I had seen that page, thanks. Put together the attached diagram today.
I was looking at Quinled.info and found his page discussing the Data Signal resistor. Based on what I read there and the fact that I am not running my data wire in a cable bundle with a ground line, I probably should have used 249Ω rather than 56Ω.
I also saw a thread in the Issues section where someone was having similar ‘noise’ issues running two ESP8266 units off a single power supply (and resolved it by using two data outputs off a single unit)
ALDIY December 24, 2021, 3:58am #6

Although it is not a solution but something we used to see if the PSU or wiring is the problem is to power the MCUs from different source ( keep the ground ) and see if you still face issue .

Also does your MCUs recycle or not , in our case it was rebooting but we only found out by continuously ping it because it comes back on in 1-2 seconds .

I do hope you can get help to fix this because you have a 300 Watt PSU and big setup .

If all fails then might be we can consult outside the forum as there is one youtuber that can help
but he might not be available until after the new year . No harm in asking him

it is pretty well documented that many i2c shifters are not fast enough for use with wled.

If you’re still trying to “work-around” this basic issue, I think your fighting an up hill battle to no profit.

Your diagram shows a reasonably well laid out power distribution assuming you have enough injection points in the props. If you haven’t done so, I would put the injection points in the relative center of each prop. That will tend to cut the drops to 1/2 the maximum across a full bright/white prop versus injecting at one end or the other.

Personally I would replace all the I2C’s with Tx-Rx RS485 pairs and add one on the prop6 → pro7 connection. Others have had success on those lengths with standard level shifters and cable/resistor “tuning”. I don’t find it’s worth the effort and simply drop back to the Tx-Rx solution given it’s cost and simplicity. 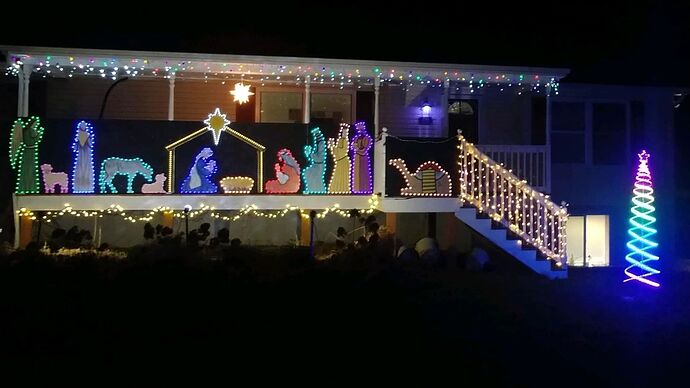 HouseFront1707×960 132 KB
Each character is a prop, as is the stable/star. Power is injected at LED #1 on each prop.
My plan for next season (at the moment) is to replace my three ESP8266 controllers with a single Dig-Quad. I will also rework the data line connections between the props as I suspect my current ‘bullet connector jumper wires’ design probably isn’t helping my situation. I’ll also take a look at the RS485 approach.
Have a Merry Christmas!
divsys December 24, 2021, 6:26pm #9

So I count 13 props including the star.
It looks like the Angel on the left and the Wise Men (and maybe the camel?) on the right have the largest pixel counts in terms of injection points. If you are indeed injecting 13 times (one for each prop) you’re probably reasonably OK for voltage drops.

If you are reworking for next year, think seriously about moving injection points to the center LED of each prop string. If you cut the voltage drop shown at the end of a string from .5v to .25V, it can make a big difference in repeated stability between props.

As far as data lines, good short connections are always a good plan. Bullet connectors may or may not be ideal depending on how robust and clean they are. One of the things I’ll do for outside data connections that have to live in high humidity (not under water)/adverse conditions is to fill the connector with dielectric grease before I put it together. It tends to displace water away from the contacts and keeps corrosion at bay.

Definitely experiment with the Tx-Rx RS485 pairs. They can vastly simplify and improve the reliability of your data path. I’ve said before, I use appropriate gauge wire for power as needed and generally use small 22/4 wire for data. One pair powers the Tx/Rx device and the other pair is used for the A-B data lines.

Got the display broken down and parts back inside. I picked up some TTL/RS485 converters and set up my first test config. The converters are the ones with through holes for a 4-pin connection on the TTL side for power and rx/tx, then a 3-pin connection on the 485 side for A/B/Earth.
@divsys - are your RS485 connections ‘pluggable’, and if so, what are you using (or would recommend) for connecting pieces? I’m trying to think of good options for packaging the 485 receiver at a prop and keep it weatherproof (I’m in upstate NY so rain/snow/ice are all concerns), but also keep things ‘modular’ so they are easy to store/move. I could solder the 485 receivers to the prop and put a waterproof connector pigtail on it for the 485 cable and then hot glue/heat shrink it, but open to other suggestions.

I’ve gone two routes on the outdoor versions of the TxRx pairs.

I leave a generous tail and just splice the wires using gel filled “B splices” (often used in Telco). The gel keeps the splices reasonably water proof and a wrap of good electrical tape is usually all it needs. I have a few of these that live outdoors in the We(s)t Coast and they’ve done well.

As far as which approach is better - 1) is definitely cut and dried easy to see, but a little bulkier.
For your props it would probably fit in the back quite easily and if you mount it vertically you get a “doghouse” for your connections to hide in.
2) is neat and tiny, easier to hid behind a string of lights but very labour intensive to build.
In general I treat either of these units as consumables. Inevitably I do something stupid in my wiring and kill one. I just swap it out, they’re cheap and simple to wire.

There’s a picture in one my previous threads to give you and idea: Personal project for my backyard... which way to choose? - #7 by divsys