TDLR: I have about 10 meters of 22GA coming from the power supply directly to a second LED strip for power injection. The problem is that there’s voltage drop immediately: it starts as yellow and goes into red and then dims into nothing in about 30 LED’s (the color is set as light green). It’s getting power directly from the power supply; how can only so few LED’s be lit up?

Before I spend a whole day trouble shooting or spending money on things, I may not need I was hoping for advice in which direction I should go. The problem is stated in the TDLR. My first strip of LED’s (~2-3 meters) is lighting up just fine. At the end of my first LED strip the data wire joins up with the power injection wire and follows it to the 2nd LED strip where the problem is occurring. 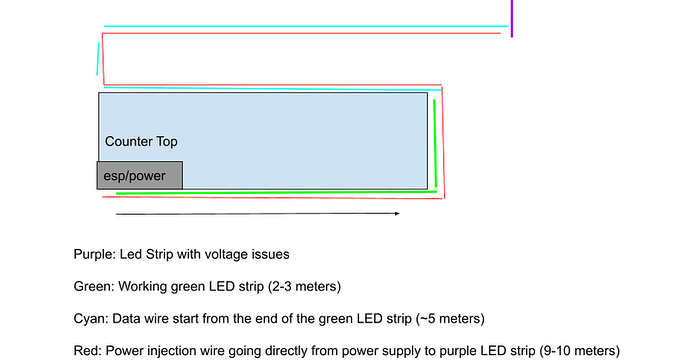 The green lines here is the first LED strip and the blue is the 2nd LED strip / where the light cuts out. The power injection cable follows the green line and hugs the wall all the way around until it gets to the second strip. 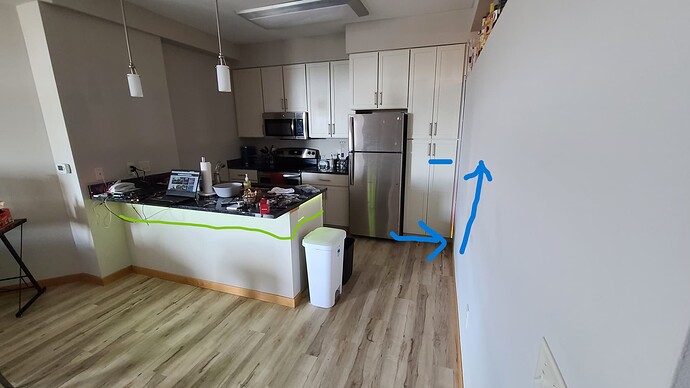 You are asking a lot of the data wire from the end of the 1st strip to the start of the 2nd, that’s on the long side for a data wire (any data wire).

The bigger issue is your injection line.

Refer to one of the voltage drop calculators: Voltage Drop Calculator
Plug in 10m at 5V and 7A for 22AWG wire and you get?

You’re asking your injection ling to carry too much load over too long a distance with too small a wire.
22AWG is fine for data, but is not suitable for the kind of current you’re asking it to carry.

You may still need to deal with the length of your final data line (I always suggest a TxRx differential pair at 10m), but realistically until you deal with the power issue data is moot anyways.