So i bought a esp8266 flashed it with wled

Now im tryn to create 3 segments under my table behind the table and behind the monitor.

First segement is coloring right and all functions are working. So i cut it and expand it with 3 cables and the second strip is just lighting up red and dont react on my commands via the wled center only the first strips reacts. What can i do.

I attached a picture in there you can see the expand cables there coming from the first strip. 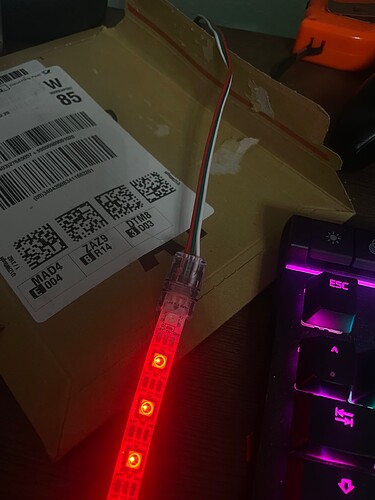 Let us know how it goes.

Hey thanks for you respond.

So i measured and it shows 0.0v but that can not be. If i plug a shorter strip in with 10 leds its working too only the first led of the second strip goes crazy sometimes.

How you would do a project like mine?
3 Segments with about 246 leds?
Is it possible to do with single esp and a 5v 10a ps?

And how would you connect the strips together?

Generally you should be fine running ~250 LED’s off a single ESP8266.
5V @10A might be a little light if you expect everything on white at max brightness.
I would suggest you’ll need power injection at multiple points for that long a run.

As far as breaking the strip into sections, watch out for the “data distance” between strips.
The last LED of 1 strip feeds the input of the next as if it were a micro controller, the signal is 5V TTL and you may run into issues sending it more than 1 or 2m.

Sounds like you’re having trouble getting proper power to the strips. I would recommend you add power wires directly from the PS to the 2nd (and eventually 3rd) strip. Nothing says you have to do your power injection at the ends of a strip. I personally prefer the middle so I can power both halves evenly.

You can use much smaller wire for the data connection from strip #1->#2, but proper power will be needed for each piece. You may or may not need a secondary ground along with the data wire (that ground can be small as well).

So if i power the second and third strip directly from the ps and using the data cable coming from strip 1 it maybe can work?

I try it later.

Yes, basically the data connections can be completely independent of power connections as long as ground is common. You just have to watch out for the data lines that get too long and corrupt the data.

Thank you very much it worked!

Maybe you can help me again.

I have no set up 3 segments all in different colors.
Now if i say Alexa Strip to 50% they get all the same color. I already found how to start with alexa in a preset but the color dimming function dont work for me me like expectet.

Glad you’re up and running

Unfortunately I’m not an Alexa user so I can’t help there.

There has been some activity on the forum, so a search might help.

Someone else may be able to chime in…