Display Temperature with a WLED strip

Hello!
Is there a way to display a given temperature with a WLED strip?
Let’s say I have a 30 strip and I want to light the strip based on the temperature input from Homeassistant.
The idea is to create presets and trigger them via a HASS automation.

Hello , You can use individual LED control JSON API - WLED Project .
So based on your HA temperature sensor you can light up the number of leds you need
below example will light the first 10 LED
light_74.txt (169 Bytes)
but other examples in the link will accept a range so could be easier to pass as variable in your HA call service . And you can use mqtt for the API call if you like . 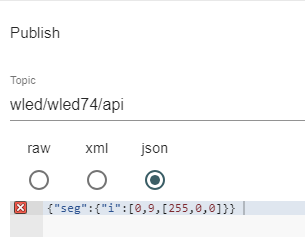 Could be other more efficient way of doing that but that what we tested , cheers

Thank you, ALDIY! That sure does look like a steep learning curve but might be the solution as you said you already had that working.
Will check this out!

It is working yes and it is easier then it looks ,we are testing with students so if you like to get more info or actually have us make some of the calls for you in HA then we are willing to do so .