I’ve never seen this behavior before. I was hoping someone might recognize it. Thanks for your time and help!

I’ve been using FastLED/WLED for a while now and this controller works fine with other lights I’ve tested with. The strip’s data line is fed directly from an ESP32’s pin with short wires, and +5V and GND are run with separate wires that doesn’t pass through the ESP32’s PCB. 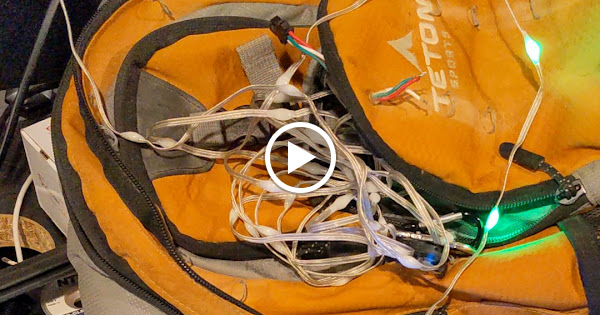 For the above videos, I’ve limited the strip length to 5. The same issue occurs even if I select the “skip first LED” option.

In one video, the 5 LEDs are set to solid green. You see green on the last 4 LEDs, but the first LED alternates between green and white.

In the other video, the 5 LEDs are set to Pride 2015. The last 4 LEDs are animating correctly, but the first LED is pulsing white in-between every update to the strip.

I would first try taking that bread board out of the equation. A lot of times things don’t make very good connections using them. If that does not fix it maybe there is something wrong with that led.

You do have the ground from your power supply, esp32 and led strip connected together right? All grounds must be common.

I would 2nd the suggestion to take that 1st LED out of the strip. Cut the data line and jumper past the LED or try another strip altogether.

The issue was present originally without the breadboard, I only moved to the breadboard so I could try to prototype faster to isolate the issue.

The grounds are common.

I’ve also (twice now) removed the first LED from the strip, thinking that was the issue. But the new first LED again displays the issue.

You said you tried the check box to skip the first led. Did the second led blink then? lol

Strangely, if I skip the first LED (or change the segment to exclude it), the first LED still blinks white in-between refreshes. It simply goes to black (in-between the white flashes) instead of the color it would otherwise be told to be.

That one is beyond me. Sorry.

For any future user who stumbles across this, the issue does not reproduce if I flash a FastLED example sketch directly to the ESP32.

Not super helpful, I know. But that does seem to imply this is a WLED bug somehow.

There was a recent update for some flickering in 0.13.2 with the ESP32.