Is there a maximum number of LEDs?

hello i have a problem. I only have about 600 LEDs lighting up out of my 800 total and I don’t understand why.

I configure Wled at 600 leds it tells me that it uses “5V 34A supply connected to LEDs (for most effects, ~12A is enough)”
as soon as I have more LEDs around 40A it does not work! while I have a 60A power supply I do not understand! help me ! 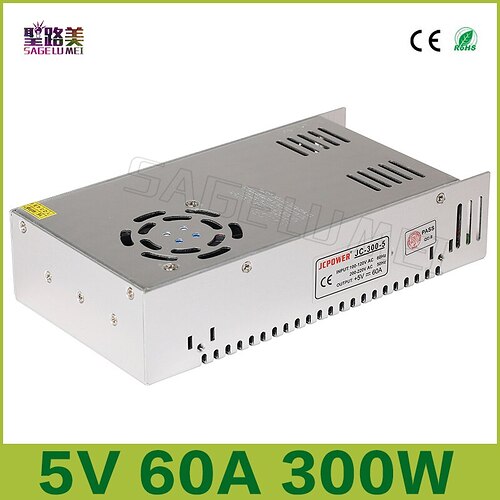 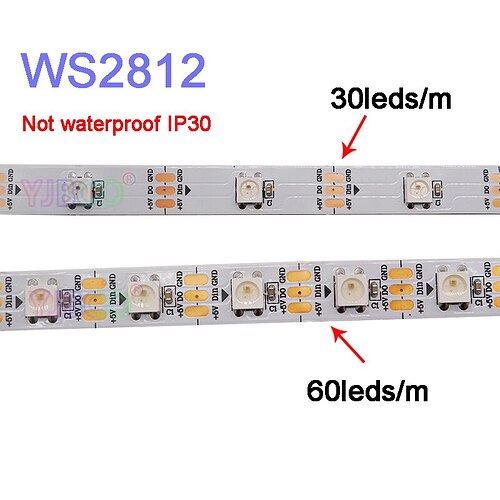 infact to put it more simply I can’t make White with my LEDs. purple, red, blue, green everything is ok. Wled : “5V 40A supply connected to LEDs (for most effects, ~14A is enough)” I do not exceed 60A! I don’t understand! 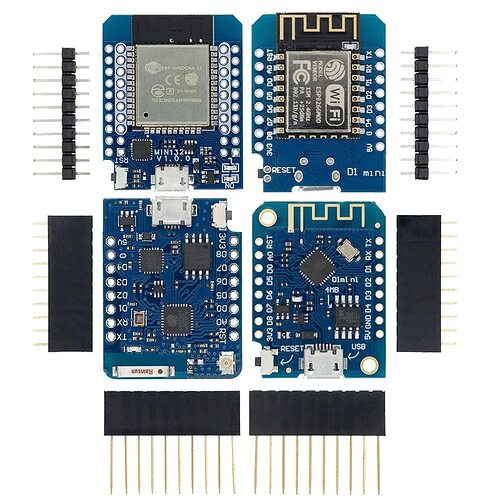 Did you inject power at several locations down the strip? Did you turn off the brightness limiter in settings?

the electricity only goes to the entrance of the LED tape. No, I didn’t turn the limitation off. I have the impression that the Wled or the esp do not want to exceed 40A for the time it should support more, right?

All the info about not exceeding XXXA is purely safety “guesswork” by WLED.
It doesn’t measure anything, it just takes what you tell it about the mA for 1 LED and multiplies that by the number your using and factors in the brightness level.

The other thing to remember, power for your LEDs comes from your power supply NOT from your D1 mini!
You may connect the power wires from the PS to the D1 then to the LEDs, but that’s not a requirement.
The only thing the LEDs need from the D1 is a ground and data line.

Your power supply wires to the strip carry the current you need.

You need to connect more power wires at a few locations down the strip. You can’t send enough power to all those led’s from the beginning of the strip and I hope you are not sending the power from the esp to the strip. With all those led’s you will end up frying the esp. You may want to have a look here: Wiring Pro Tips - WLED Project

Did you change brightness limiter from default 850mA?

The ESP8266 just gives the order to the LED, the LEDs are powered by a power supply. I have disabled the limiter, it actually works better! but now that I put white, it’s white on the first 400 LEDs after the other LEDs turn yellow and red. It seems to be a power issue. I had done the power calculations normally 60A should have been enough for 700 LEDs… I don’t understand why plugging in several places on the LED strip to get the electricity changed anything? indeed the LEDs are connected in series and not in derivation.

Inadequate injections to the LED strip.

You’re describing a classic voltage drop problem.
The calculations for a 60A supply are probably reasonably correct.
Unfortunately you probably “assumed” the wires carry the power just delivered the power where you want it and that’s it, right.

Any wire you use will have some resistance, the smaller the wire and the longer it is the more resistance.
When you try and supply 30A over that piece of wire, Ohm’s famous law comes into play and says:

What’s worse these drops are additive, the longer the wire gets the more resistance and the bigger the drop.
Eventually the drop gets to the point your LEDs won’t light properly.
But wait! It’s even worse again! The led strip you’re driving uses internal copper lines to connect all the LEDs. That copper acts as a wire and has its own resistance, so the longer the strip you have the more drop you’re going to see.

How do you get out of this problem?
You use thicker wire, or the same size wire but more of them.
That’s what “power injection” does, it splits up your 30A across more than 1 wire so you have a bunch of smaller drops you can live with rather than 1 big one that causes headaches.

between the 5V60A power supply and the LEDs there are 3 meters, the wire is 1.5mm². the LED strip measures approximately 10 meters for 720 LED 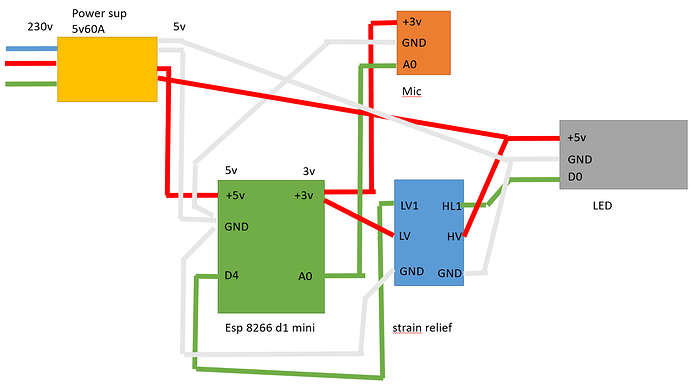 The diagram looks fine, that’s the basic idea.
Lookup some of the voltage drop calculators in the KB.

Simple way to test the worst case: set the strip on 100% White and start measuring voltage at the start of the strip and all the way down. You’ll be able to measure the actual drops.

if I take a stronger power supply, if I increase A that can solve the problem of V ?

upgrade to 80A ?
there is still as much loss but there is more “strength” so the white will go further on the LED strip, right ?

Nope, the power supply is capable of supplying enough power to the lights, its just that the wires connecting the lights are “stealing” some of that power (and gently heating themselves up with the loss).

If you read my previous explanation, you’ll note the only thing that affects the amount of voltage drop is the resistance of the wire (usually that means length) and the current flowing through that wire. The applied power supply voltage (12V, 5V, 24V, etc.) doesn’t enter into this calculation at all.

No matter what you do, you’ll have some voltage drop across your power wires, that’s just basic physics of electricity. The trick is to reduce the drops to acceptable levels.

As I mentioned the KB has quite a section of tutorials and reading on the subject (everyone has to deal with it at some point)
Try: Power Injection, do a little more research and feel free to continue asking questions!

Here are your basic options: 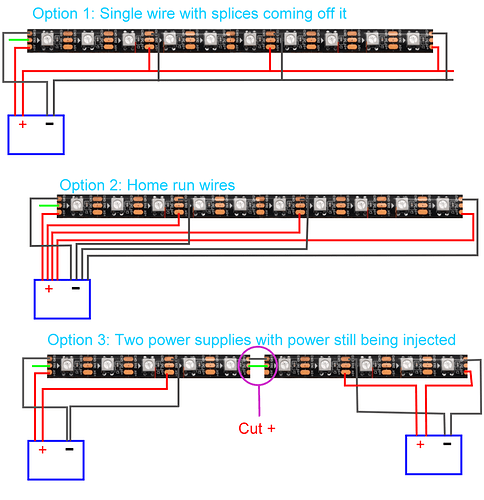 ok thanks for the info. With the current space in my tubes, I’ll have to take option 1.

In general with multiple injection points, you can minimize the number you need by injecting in the middle of your strip and not at the ends.
If you need 2 injection points you divide your strip into 1/3’s and inject at the 1/3 and 2/3 points.
For 3 points, divide in 4th’s and use 1/4,2/4,3/4.
You can keep going using 1/5th’s, 1/6th’s, etc as necessary.

That technique will minimize the variations across the strip and give the best “injection balance”.