Is anyone else using these Samnet addressable fairy lights from China? They are low cost, as little as $17 for 20m strands. And low power, a standard USB phone charger is enough to power a 20m strand and 10m can be powered with AA batteries. And you don’t need diffusers as they are built in. They come with a USB IR controller that I promptly cut off and hook up to a WLED controller.

Thank you for sharing the link! Ordered them to check it out

These seem like incredible value and the power consumption should be rather low too if they are able to run 20m on a USB or 3x AA.

Here there is already quite a bit of discussion on this new style of LED: https://github.com/Aircoookie/WLED/issues/1312

Oh yeah, I stumbled across that thread back in Nov when I was trying to figure out what they were. Quite a bit more discussion since then.

Great to see a community of fellow geeks pulling stuff apart, figuring out how it works and building some amazing things along the way. 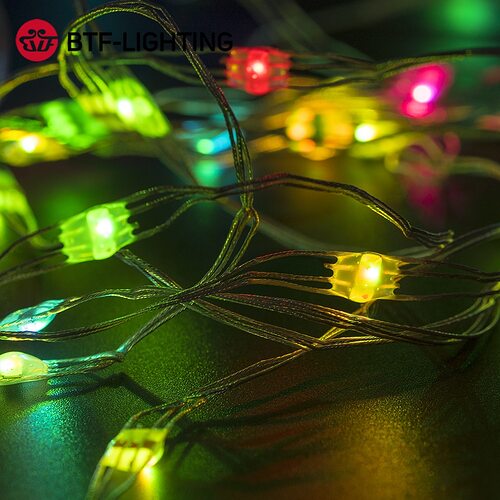 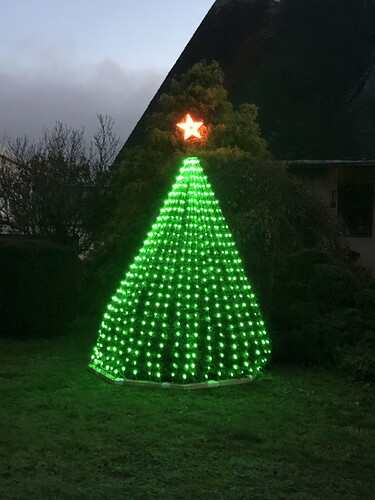 It’s a addressable matrix that works fine with xlights

Yep. Those are WS2812B lights and they are definitely nice. But the lights I was asking about cost 1/2 to 1/3 as much as WS2812s. How many meters did you use for the tree?

One review claims to have used them with WLED.

How’s about to publish the details of your nice work ?

Oh, they definitely work with WLED. It could have been my review you were looking at. I was just wondering if other WLED users are using them. And in particular, if anyone figured out a cool use for the fixed addresses.

Since i have been asked to post some pictures… Last christmas I did a Christmas (small) Megatree with a 600 pixel Matrix. I used 12 of these LED String: AliExpress Link 1 ESP32 and xlights Software. The goal was to fit it around a normal tree: [Tree] Therefor it builded this: [construction] All Light Sequences have been made in Xlights and are streamed wireless to the ESP32. Result: my favorite:

Nice! How hard was it getting it over the tree in one piece without tangling?

I tested these out today to see how much power they draw. A 100 light string on full bright white draws just under 1.5 Amps.

You can’t see the difference running side by side with a WS2812B string. How the heck did they pull this off?

Anyway you can show how you cut the wires and connected to WLED? Have these on order to play around with and would love to see your hookup!

As requested, a video showing how to hook up the Samnet fairy string lights and outlining key differences between these and regular WS28x.

OK, these LEDs break all of the rules! I had a few theories about how they worked based on them having a continuous data line. The internal chips do not seem to be modifying the data signal in any way so:

I tested both of these theories, and guess what, I had no problem driving 20m of leds with a 15m header between the controller and the string - with no level shifter! At 35 meters from the source, the end of the string was dimming and you’d want a power injection. But the important thing is that the data was getting through. I was also able to attach the controller at the far end of the strip and that happily worked as well.

thanks so much! Thinking of putting these on a golf cart for some fun.

I know this thread has been dead for a while, but I have some first-hand experience with these, and I can try to answer any questions.

I bought three 20m strings, and three ESP32 controllers for less than $4 each. The most difficult part was flashing WLED onto the controllers, but I’m still not sure what the problem was.

In short, they work as advertised. I used the VCC pin of the ESP32 (rather than 3.3v), and the whole string is being reported by the controller as drawing around 850ma. I’ll be putting at least some of the lights up today - I haven’t actually seen them outdoors, but I suspect they’re going to seem a bit weak compared to other alternatives which use significantly more power. Most of the colors border on “pastel”, rather than being vivid. I’m not sure how much of that is because of the gob of epoxy that the LEDs are encased in.

So far, I’m pleased. There are some compromises, but having gotten three strings and three controllers for less than $80, it seems like a great place to start learning about WLED and ARGB strings.

EDIT: I’ve had some trouble with these strings (below) and no longer recommend them, except possibly as an indoor decoration.

@strydyr I am interested in trying this as well as my first WLED project and first electronics project in general. Question though- how did you connect the bare wires of the strings to the controller? I was planning to use a NodeMCU ESP8266 dev board with male pins. Struggling to find a solderless solution to connect the bare wires to the male pins on the board.

You can use breadboard jumper wires. But you still need to attach that to your fairy light wires. Maybe you could get away with using a F/F jumper wire and doubling the copper wire and stripping the epoxy stuffing it in the hole. I’d strongly recommend putting JST connectors in both the controller and the lights.

Many lights have a meter or two of regular 3 conductor wire and it is fairly quick to crimp on the pins for the JST connector.