I have an issue with my leds or board.
I had bought an esp8266 from azDelivery and flashed it with the Wled Software and connected it to an 20A 100W powersupply. Worked fine gor some time but at dome point it stopped working/ responding. I figured out that a cable was broken but i wasn’t in the mood for repairing. A fem months or so later i finaly repaired it and it worked fine but after a hour i unplugged it and plugged it in again but it stopped working and only the first led was white and the rest was dark. I tried replugging and leaving it put out for some time and i got it to work like that. For some reason i plugged it out again and this time it stopped working aswell and i thought no big deal but i didn’t got it to work this time like that. I tried doing the same thing pressing the reset button bot nothing. I got it to several ‘‘positions’’: 1. nothing (everything dark) 2. First led white 3. First led white second green 4. Random leds lit up (frozen) 5. The 2. Thing plus random leds 6. The 3. Thing plus random leds. I have about 19 meters of LED stripes (WS 2812) and around 550 leds. The cabels aren’t the issue because it worked for some time without problems and my connections aren’t that bad. I hope someone can help because i nearly lost all my patience in that Project. 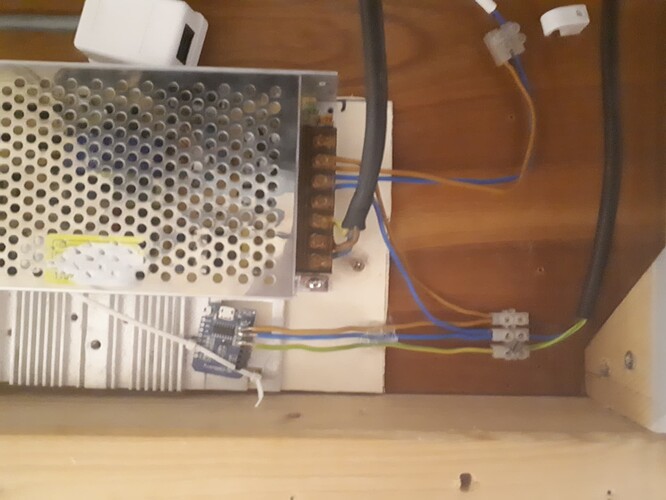 Ps: if my english is bad please ignore it

Random LEDs generally means you didn’t use a level shifter and need one.

It looks like you have the ESP mounted on a heat sink? Maybe that is shorting something out.

That could be true but why did it work before.
My first connection was exactly the same and i am sure that there is space between the board and the heatsink

What do you mean with level shifter

I’ll try it but now im having only the random or nothing effect. Because in the tutorial i folllowed i dindn’t need a levelshifter but suddenly after a reset i need it. Maybe is the software brocken but i can’t flash it again because my computer (Win 10 32bit) and my Laptop (Win 7 64bit)
won’t detect the chip what leads to my second problem: even after installing countless drivers and trying different usb cabels they don’t know what do do with the board (detects it as a port but it stopps it ‘’ because of an issue ‘’ (code 43))

Having a bad ground connection cause strange issues as well as not having a level shifter/data booster. If you have some extra pixels or led strip laying around try connecting 1 led close to the esp and see if that fixes the issue. That would function like a data booster. If it does then the distance from the esp to your led’s is too far and you will either need a shifter or keep using the one LED close to the esp or move the esp closer lol. Could also be bad contact using those screw terminal blocks or corrosion.

I actually Built a shield with a level shifter and still had wonky lights and had to add a pixel close to my esp to get things working. My distance was only maybe 10-12ft from esp to the LED’s. While on the other end of the house no sacrificial pixel was needed and it’s distance was closer to 20ft. Each setup can differ even if it all seems the same.

How far is the esp from the first strip?

I put another led strip between the esp and the other leds but its the same. But one thing bothers me too: i set the max of leds to exact number of leds i have but when the random led effect shows up the last led lit up like if there was no additional 60 leds do i think its the software

Any othe ideas what causes the problem or how to repair it?

If you put another strip between the esp and the other strips I would guess that there is a problem with one of the wires you have soldered to the esp and the feed side of those screw terminals or bad power supply or bad esp. Do you have another esp you can try? If not and you are in the USA you can find 8266’s cheap on Amazon/eBay and get fast shipping.