Hi all, I picked up a AIO led strip that has a IR remote and inline PIR module, it was a few pounds/dollars for 2 metre length, thought I could use it in a future project with WLED, plus love a LED bargain.
The problem is, I cannot match what type of strip it is. I’ve gone through the internet trying to match images but cannot find it.

It has what seems like WS2812 modules plus seperate white LEDs and by measurement seems like 2835. Can anyone identify it, because although I’d class it as a RGBW, it doesnt match whats commonly available? If I can identify it, then I will know if it will work with WLED.

I’ve added a photo to help. Thanks 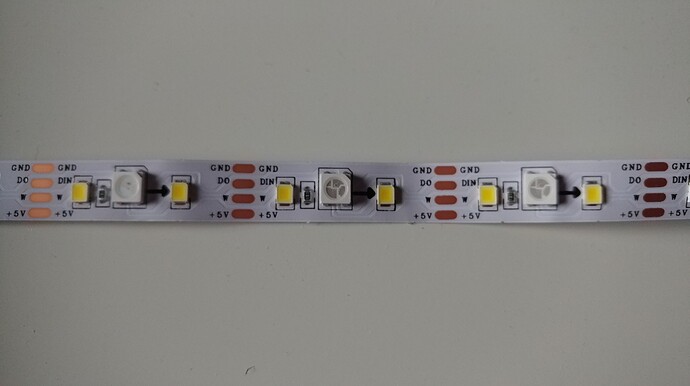 From the photo, my guess would be a standard WS281x strip with a parallel analog W channel.
So you should be able to control individual RGB LEDs, but the white channel would be brightness only for the whole strip at once.

You’re right, the white LEDS all light up together with brightness control. I don’t mind that, its actually better for my outdoor project, as the white led is more accurate and draws less power. Similar to the SK models.

Any chance you have a model/product code or do you think it’s bespoke and will it work will WLED?

Very good probability WLED will drive that.
If you add a suitable MOSFET it can also drive the white LEDs.