Hello, I really appreciate this great project. I already got some experimental lights running on a Wemos D1. Now I wanted to upload WLED via the web installer to a ESP8266 07 / 07s due to the possibility to have a langer Wifi range with an external antenna. The flashing work both ways (once over an own build setup, once over an programmer socket) until it reaches nearly 100%. Than the error “Timed out waiting for packet header” is shown. I already searched online, but eg the hint with additional capacitor between EN and GND did not work for me

Can anybody help here or give me a hint? 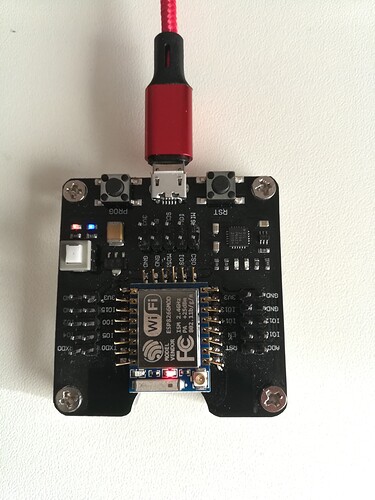 Hello , You did not mention if you can flash in Ardunio IDE and if so them below might not apply .

I haven’t used that specific programmer nor chip but used others including esp01s and 2m and 4m esp8266s as well as some esp32s . For my own testing you may (or may not) need to keep gpio 0 connected to GND and some of the MCUs only worked by flashing the corresponding bins from this site https://wled-install.github.io/ but did not work from the normal wled web installer here https://install.wled.me .

This is from my own testing on a PC and a mac but with a lot of different units . Cheers

thanks for your message. I am not using Arduino IDE but I tried to flash again with the WLED web installer and added a jumper wire between GPIO0 and GND, but same problem as above.

I also tried a different method, the esphomeflasher (Releases · esphome/esphome-flasher · GitHub). This was also running very smoothly for the WLED_0.13.1_ESP8266.bin:

(sorry, but in my window at some point whyever the old log trace gets overwritten by the new data)

but in the end it exits with:

So sadly this also does not work out for me. So even the bin-file can not successfully uploaded. Any further advise is really appreciated…

I am aware you are not using Arduino IDE . However as the question is related to flashing that module in general and not specially WLED I assumed you have tested in Arduino IDE first to see if there is a way to flash then test WLED after .

In my case some of the MCUs behaved differently when flashing and we had to do trial and error but most worked from this web installer https://wled-install.github.io/ . If you have a lot of MCUs then i assume you can also try that route of trial and error . I wish you luck as you may need to google how to flash that module with that burner and hopefully find a way .

Maybe the esp is not making a good connection? That is a weird board. I see that the esp is not soldered but just press fit into a weird socket thing. The only reason I could see using that board in the first place would be to flash a bunch of esp’s to later solder to other projects.