my intention is to “upgrade” my current ambilight setup with a second instance - which is my whole ceiling. I have 1143 Leds around my living room which i wanted to integrate trough Hyperion Udpraw.

Now i came across this Topic (and of course the wiki):

Hi, I want to upgrade my Hyperion Setup and ordered 144led/m strips. This would put me at about 540 total leds. Is the 490 leds mentioned in the wiki a hard limit? Is this a memory issues on the ESP8266 and would using a ESP32 help? greetings Maik

My idea or what i thought about is: maybe it is possible to just duplicate the signal of one LED and spread it to all the others because i only want hyperion with the single-color-option on my ceiling.
Would that be possible? I think yes but i have no clue of coding and stuff.

I would be very very happy if someone has a solution <3
Have a nice evening!

Duplicating the signal is not possible at the moment, but it might be in the future! I believe it would be useful to have the segment grouping and spacing features also available for live data streams like from Hyperion. Then setting the grouping to 3 would mean one “Hyperion LED” would control 3 real LEDs and hyperion would only need to send 381 LEDs.

Sorry about the maximum for udpraw, but it is a network driver limitation. WLED supports other protocols (DDP and tpm2net) that allow for more by splitting the data into multiple packets. They might be supported in Hyperion, though I’m not sure.

maybe the information of 150 leds is sent together, but no idea.

its definitley not as smooth as udp

but it will work for now as an acceptable result!
Thanks for that tip with the different protocols, dont know why i thought udp would be the only working one … 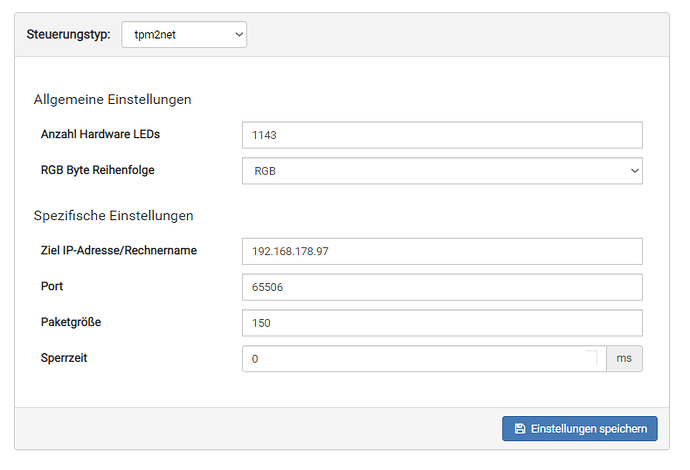 edit//
However the idea with segments for streams is great

with that grouping option i can imagine a nice feature for wled!

It is to be expected that it is not as smooth, it has to handle a lot more packets!
I’m not sure if the definition of packet size is in bytes or in # of LEDs, with or without TPM2 header, but you could give packet sizes 381, 387, 1143 and 1149 a try. One of them might make your setup a little bit smoother by reducing the amount of packets that need to be received

oh ty for the quick awnser, i will test this tomorrow and come back here!

Keep up the good work, this project is fantastic

you are a genius!

Just to understand it: how did you come to numbers of packet size? is there any maths behind?

Awesome that that worked!
You have 1143 LEDs and each LED needs 3 bytes of data (R, G, and B). That’s 3429 bytes (also often called channels) per frame.
Now we need to evenly split these 3429 bytes across UDP packets so that each packet has less than 1470 bytes, the maximum. If we go with 3 packets, we are at 1143 again!
Now we add 6 bytes per packet, which is the size of the header of each TPM2 net packet.

This way the ESP only has to deal with 3 packets per frame, with the packet length set to 150 it was 23 packets per frame (although those are smaller, but network overhead makes fewer larger packets more efficient than many small ones)

So yeah, a bit of math, but not too bad. Currently the TPM2 packets must all be the same length (and thus the led count a multiple of the packet length), that’s why we have such a specific packet length instead of 1000 or so.

Hi, Let me preface this with I am new to Hyperion but I’ve had WLED running for a while on dig quads and dig unos and I love it! I am however running into an issue with the 490 led limit. I am trying to use an SK6812 5v strip and I will need to use about 613 led’s total to cover the back of the tv (85"). I have a test strip setup and running using the WLED controller type from the dropdown in the LED hardware section of hyperion as long as I don’t go over the 490. When I tried to copy the solution shown here to go to the 600 I have hooked up as a test, I get no output at all. I copied the port 65506 that Dani used but I’m not sure how that port was selected meaning I dont know if that is installation specific or a typical port or where it came from. I tried the same methodolgy of putting 606 as the max packet (600 led’s I have hooked up to my dig-quad + the 6 for the bytes per packet for the size of each TPM2 net packet- not sure what I’m typing really- just trying to follow directions) and get nothing but I’m guessing either it’s a port issue where I should select a different port or possibly the math doesn’t work the same with 5v sk6812 strips since they have a white channel along with the RGB channels too and they’re not grouped into 3 LED sections like a 12v strip is (I’m guessing that’s why you were using 3 packets pwe LED)? Just a guess. My question is can I still exceed the 490 LED using 5v SK6812 strips (really don’t like the fake white blue color RGB’s give off) or will I need to go to 12v so every three are addressed as one block? Any help would be very much appreciated!!

ok, when I took time to think about this, I’m under the 490 since I’m using 60/m strips at just over 6m needed. For some reason I was thinking I had 100/m strips! I would still like to know how to run longer lengths when it comes up again though. Can one of you run me through the 3 packets per LED if using RGBW strips vs RGB strips and where to learn about which ports which protocols/controllers use for this type of stuff when you have a minute, please?

In case anyone else has this problem: I didn’t get tpm2net to work, but I got all 571 LEDs running using udpe131. I just added the IP and number of LEDs after selecting udpe131, the rest of the settings didn’t even need to be changed for me.

Awesome! The last entry (Exactly 1 Year and 4 days later) was doing the job. After running several settings and failing with grouping options -Hyperion doesn’t adopt segments- I almost fell into despair but eventually the whole length of all my 567 LEDs lit up (exactly 4 more than you had!). It would be still useful to know how to send segment options to Hyperion and how to run a smooth setup with Prismatik. (For low number of LEDs this program works more reliable but for a bunch of them it gets quite buggy). Nevertheless still amazing results. Thanks to Aircookie, the one who can speak with lights.