Hello fellow enthousiasts.
May I ask your help to identify the hardware of the LSC Led strip I bought in the Action shop.

It has tuya smart installed and works in home assistant using the cloud intergration, but I want to do more.
I could also cut part of the strip and control it seperately.

But first I need to identifiy the hardware. 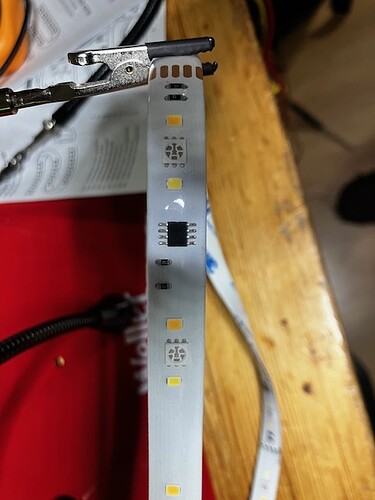 If you could help me to find out what these are, so I can start investigating what type of controller for WLED I need for them.
Flashing the BK7231N with Openbeken is another option, but I want to keep that for later. In essence I have something of 30 euro that works.

Thank you for your assistance.;

Check both ends of your strip, the D0 data line does have a direction, in and out. You have to feed the input end to control the RGB LEDs. The 2x4 pin IC is probably a WS281x variant, you should see if you can glean a part number of one of the chips (might be tough as they’re often scrubbed).

Yes, thank you.
I missed the point that whites are non addressable.
I’ll experiment with an arduino to drive the rgb segments. The data is ok with 5 volts. So 24 V separate and 5v to arduino with common ground.

The analogue CC and CW are PWM ground connections.

Hi @aslaets , i also bought these Led Stripes.
Can you please tell me in what order the pins are? 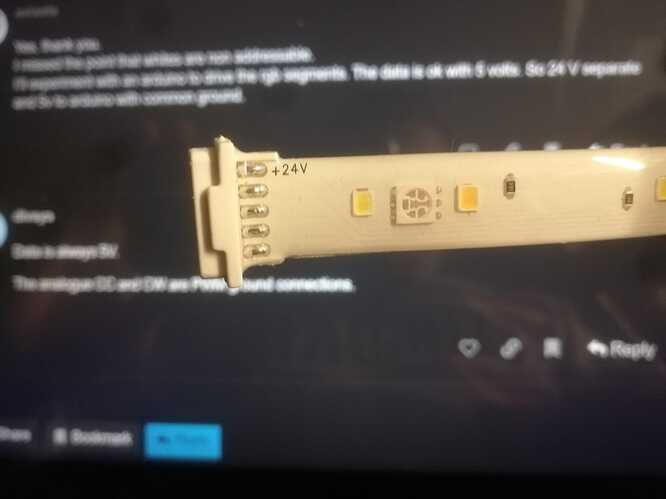 And it would be very nice if you could tell me how much Ampere or Watts each segment needs.
I’ve got a lot of led stripe left over after cutting and i want to buy another tuya controller and another power supply to recycle them into the project instead of buying one more set at the action store.
Maybe you could recommend me a tuya supporting Controller which i can use, because seperating the digital from the analouge LED Controller on amazon, ebay etc. isn’t very easy

No way to know. Check with where you got them.

I found it out by myself, opened the controller, found the pin signing and opened the plug of the splitter-cable.
The Pin Setting is this like this: 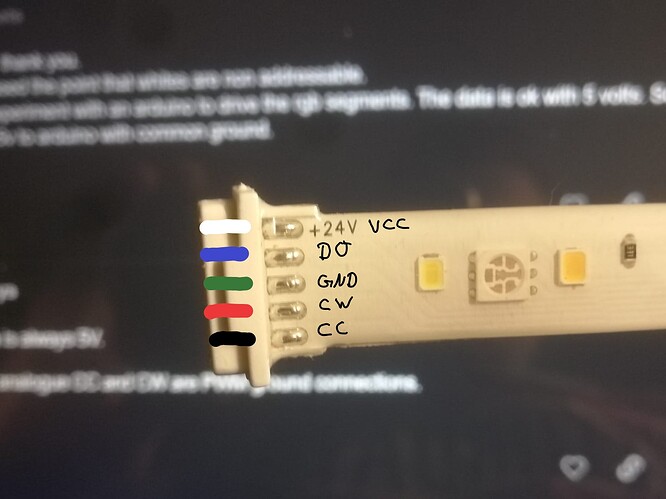 After a lot of shouting and fighting with the LED stripe, my smartphones flashlight and the lens of my sons bug catching box at the same time, I also found out what part number is written on the 8-pin chips an the Stripe:
SM16703P KZBTGNAD 14

When searching for SM16703P i found also the Datasheet. Maybee it will help you.

found something on github. With White led stripes, but the chip is the same, so maybe there is something helpful, too.

### Missing feature SM16703P support (similar to ws2812) ### Justification …General case: Those are (as far as I can tell) quite popular chinese alternatives for ws2812, yet they differ a bit from those with timing, which causes led strips to work incorrectly. My case: I was looking so long to find white led strip with addressabel leds. I finally found ws2811 ones, yet after shipping it appeared to be SM16703P, and there are no alternatives. ### Hints This is datasheet http://www.greeled.net/uploadfile/03/60/6003/21141/05/09/sm16703-english-datasheet.pdf Hopefully setting timing to provided should work? I'm not sure if it's event possible. 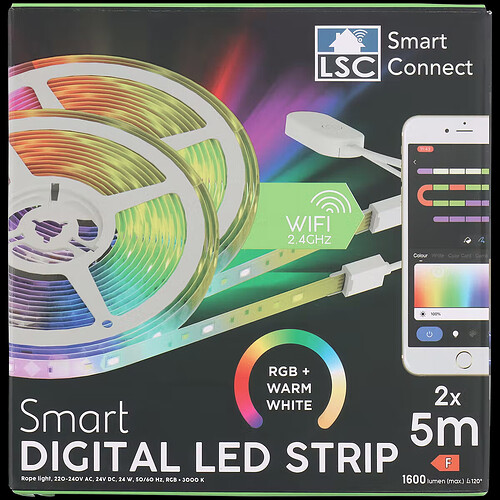 Hi Im starting to work on the LSC Smart Digital Led Strip which is a dual led RGBCW strip. On the board we have - a BK7231N - a button P7 - a

Do you have any suggestions for a tuya controller supporting the sm16703p chip?
I’m searching since yesterday, but all controllers i could find are only rgbw 5 pin analogue controllers. It would be a shame for my leftovers being unused