Would you recommend using Soldering iron, Hot Air Station, Reflow Oven or something to rework/replace WS2812B Mini 3535 on a bunch of PCBs?

Was thinking to get Hot Air station, but wondering if that’s a bad idea for seemingly delicate very melty WS2812B LEDs.

Have ~20 PCBs with 20 LEDs on each, with each board needing ~5-10 LEDs replaced (initial assembly by Fab didn’t work out as well as I hoped). PCBs are just 50mm x 50mm, so bit tricky to reach in with the soldering iron.

For long run reflow oven, for occasional DIY hotplate. One on the picture is very small and not for reflowing.

Would folks here use a Hot Air station to replace the occasional bad LED on a tiny PCB? Or still only use a hotplate to remove, cleanup and replace?

Recently figured out wrong reflow temp was probably used in my first batch fabricated and assembled by jlcpcb. I screwed up and used their default “Economy PCBA” service which reflows at 255 according to online docs. I should have explicitly selected their “Standard PCBA” service that does 240 by default, which is the peak reflow temp in WorldSemi’s WS2812B datasheet. However…

Several folks on the interwebs have griped about 240 being too high even, and are suggesting 235, but that needs to be balanced against reflow requirements of other SMD parts on the board.

Cheap $30 USB microscope is revealing, of course my first LED in the chain seems to be missing GND pad 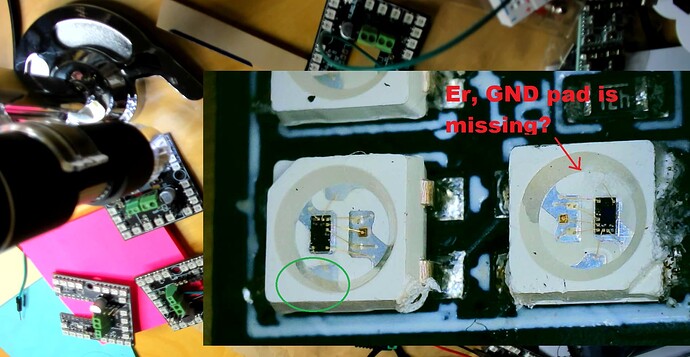 LEDs is very fragile and hard to replace. Have to have skills. Hot air station is ok, but I would say for more advance use. Hotplate with temperature control is more usable for occasional repairs or even for small pcbs to reflow.