Turning on the strips causes red to shine, then it moves to the proper preset

Hello, I am facing a strange behavior with my led installation. The issue occurs whenever I turn on the wall switch that is powering the led psu’s causing the leds to blink once or twice as red - and then moving on to the saved preset.

I am quite sure it has to do something with my transformers + esp setup because using the same wiring ( re-plugging it into an SP105E, doesn’t have any issues as above ) .

Brief explanation of the build. 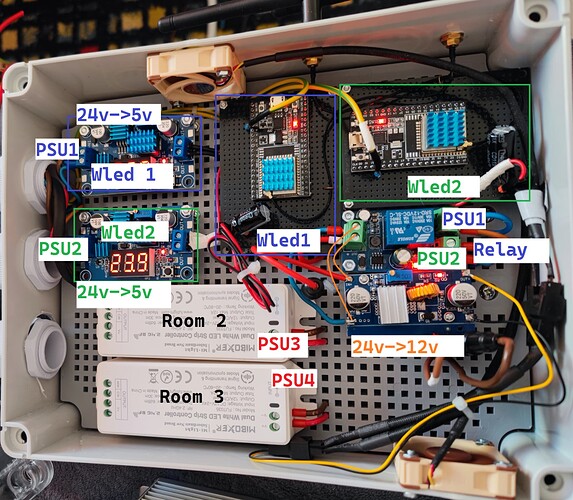 The box is divided into 4 sections that control different rooms. Each of them has an individual dedicated power supply. Each of them is lit on by pressing a switch on the wall.

The transformers turn on when the switch is triggered, it steps down 24v to 5v to support the esp32, on the power line I added two capacitors (aluminum electrolytic + ceramic). The data is driven from GPIO 2 ( I02 ). Power got injected in 5V + GND.

Issues are with the PSU1+2 ( blue and green segment - excluding the relay ) - both behave the same way as presented on the video. All the PSU’s ( 1 and 2 ) are grounded - installation type is TN-C-S.

Feel free to ask me for more details and looking into for more tips, I rather don’t want to fallback for an SP105E cause lack of customization but will do if I can’t solve this. I did try v0.13.3 as well, same issue.

Sorry but I was unable to post more than one embedded image or more than 2 links.

Have a nice day, cheers.

(Apologies, TL/DR;)
Are all the DC common’s connected together, which is the DC supplies, and the WLED boards 0V / COM terminals? You can verify this by measuring the voltage from one DC supply 0V output to every other DC supply and WLED board. Should be 0V and stable. If not, affect wiring changes to make it 0V and stable.

And for RED @ Startup, typically WLED fired up green at startup, so in the RGB setup, swap RG color order so Green is fired up at startup.

Are you telling me to connect all power supplies (-) together ( Psu1+Psu2 )? I will check the 0V once I am at the place. In terms of RGB-> to GRB swap I think that doesn’t make much sence because then the color wheel and buttons will be displaying something other than the given color. ie green will be red right?

In terms of RGB-> to GRB swap I think that doesn’t make much sence because then the color wheel and buttons will be displaying something other than the given color. ie green will be red right?

Correct. Don’t do that.

As far as the grounds yes make sure all grounds from the output of your psu’s, esp and led’s are connected together. A floating ground can cause all sorts of weird things.

This is the current internal connection schema

Do you want me to do as following

You don’t show your connections to the LED strips, presumably they’re both powered from the relay output or are they 24V strips straight from the PSU’s?
In general what you’ve added is correct, GND should be common on the DC side of the system.

If you’re switching both sides of power to the 24V->12Vs via the relay, that can add a little more complexity as you’re not guaranteed that GND will connect before V+ when the relay switches (usually only 10’s of ms lag). Most often you only need to disconnect V+, not both.

The last thing to verify is that the 24V->5V converters have a common ground between input and output.

where are the connections for the leds?

From that pic I am guessing you are using 1 psu for 1 esp/leds another psu for another esp/leds and 2 more psu’s for some other thing.

So if I am correct in that. Lets look at psu1. Connect the psu1 output ground, the esp1’s ground, the voltage convertor1’s output (5v side) ground all together. See if that fixes the issue.

It all depends on what/how your led’s are connected.