No Data Signal to LED Strip

New to WLED but have been running LED strips using FastLed for years without burning the house down so I an not a total NOOB.

I ran across WLED last week in a Reddit post and am excited to use it as I was working on a project to make my current Teensy/FastLed installations wireless by using an ESP32 but I see WLED is very feature rich and has a great GUI.

Problem I am having is I am not getting a data signal out of my ESP32 GPIO2 Pin and over to the WS2012B strip of LED’s to make them go blinky blinky to impress loved ones and neighbors.

Can someone suggest what I may have missed in my troubleshooting? This is is real head-scratcher. 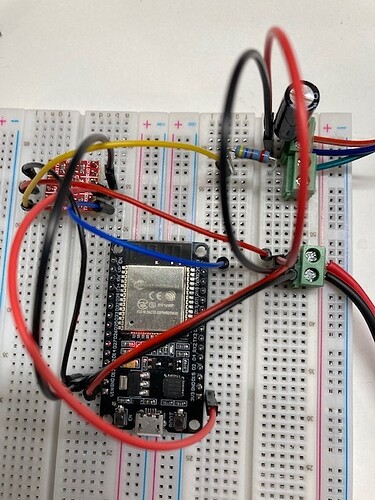 How did you flash the ESP32?
Try the web installer: https://install.wled.me

Make sure you’ve set the string type to “WS281x” in LED Preferences.
I use those exact ESP32 boards all the time with no issues.
You could try GIPO4 in the LED Preferences which maps to D4 on the board.

Your setup looks OK, should be very cut and dried.

I flashed the ESP32 twice. First tried the Web Installer. No errors reported during the upload. Then thinking there might have been an un-reported error; I used esptool.py to erase memory and then re-flash the Boot Loader and app.

String type is set to “WS281x” in the LED preferences.

Moved data wire connection and app settings over to GPIO4 and that works!

You are most welcome, for future reference the web install has been very effective for a variety of devices.

Have fun with WLED, let us know how it goes