I am having some fun designing some PCBs in a triangle shape. I want to combine three of them and make a Triforce (from legend of zelda). I will 3D print a white or clear case and use it as a Christmas tree topper, and it will be on a desk or counter the rest of the year. I already have one, but the lights are neopixel jewels, which are decidedly not triangles.

Enough with the motivation, here is the PCB right now: 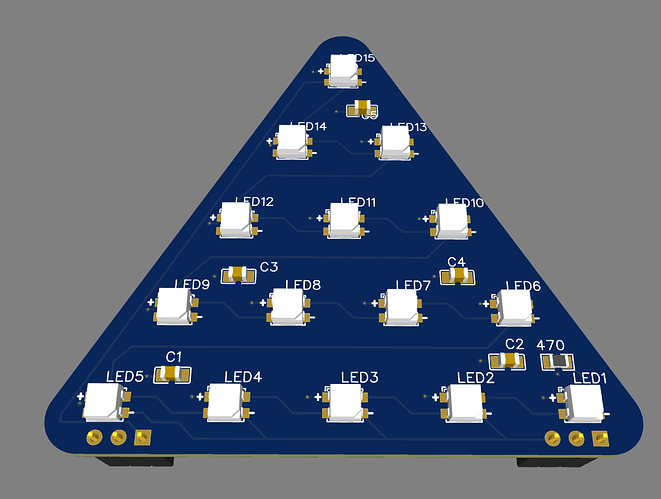 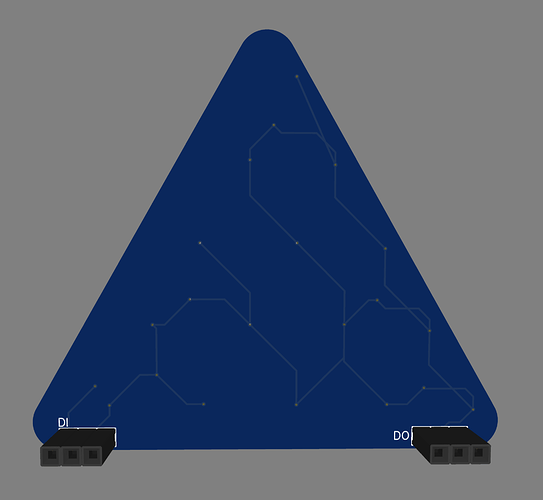 I haven’t done the copper pours for the ground or 5V yet. I am planing on using WS2812B-mini LEDs. They are 3.5mmx3.5mm, so small, but not that hard to solder.

The PCB fab will probably charge the same for 5-10 of them as for 1, so I would like all three triangles to have the same PCB.

First off, what do you think?

What would I need for that?

I would need some programming pins (tx,rx, gnd, d0).

What do I have to do for the antenna? Cut a hole? Just make sure the copper pours aren’t covering the antenna? I don’t want anything to reach outside of the triangle, but I don’t mind a cutout.

If I also added a USB mini, micro, or USB-C connector, I could make the whole thing a lot neater. 45 LEDs at 60mA is over 2.5A, but I could limit it in software. It will be too bright to look at if I let it use all 60mA. I think I have some SMD usb mini connectors in the basement.

What would you do differently? Please share your ideas. It will take a few weeks to get the PCBs, so it probably makes sense to think about what else I could add for a day or two before making the order.

And, if there are any open source designs for WLED boards that you think I should see, please link them for me. I am happy to learn from the lessons of others!

i only seen this on discord 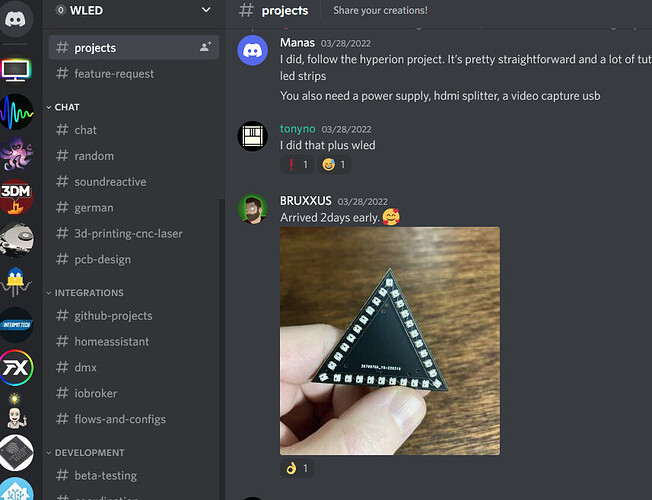 That is a slick project. Thanks for pointing that out. That project looks like it is just the LEDs (which would be fine, honestly). A lot of them in there too.

I decided to stuff the esp8266 in there. The esp32-C3 is the same footprint, but I don’t see a wled build for it. I could probably build it myself, but the esp8266 will work just fine (45 leds). AFAIK, the C3 needs different build flags. At least, it did when I built tasmota for it.

Things are a little cramped, and I learned a bit more. But I can build one with the ESP and the other two just daisy chained on.

I didn’t do a USB connector. I will just solder bare wires to the DIN connector and add a power supply with a crimped on connector (like a dupont or a molex).

The two things I haven’t decided yet are: 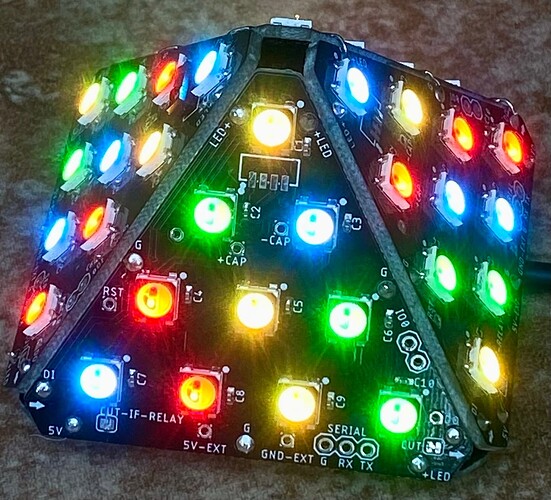 That pyramid is cool! Do you have a link to any details? 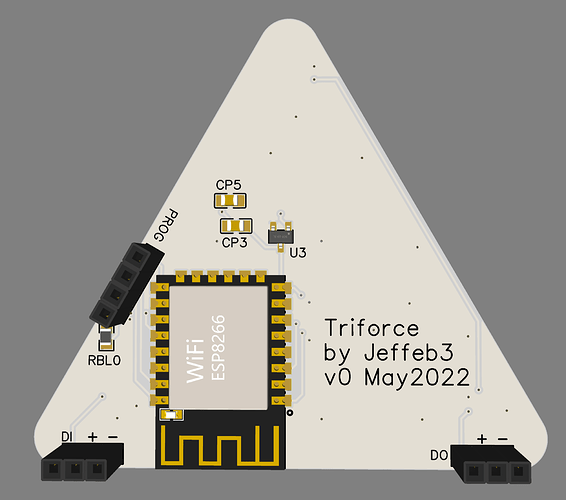 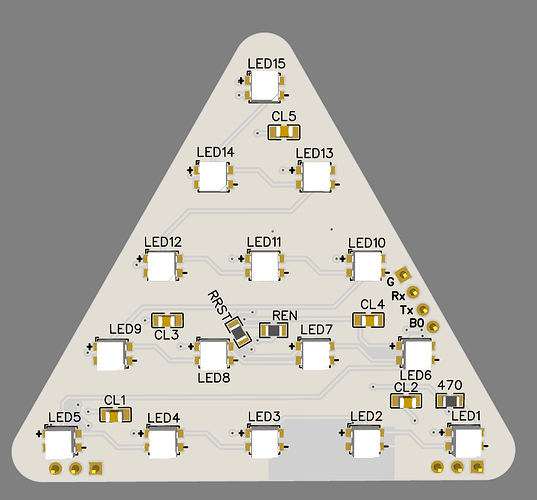 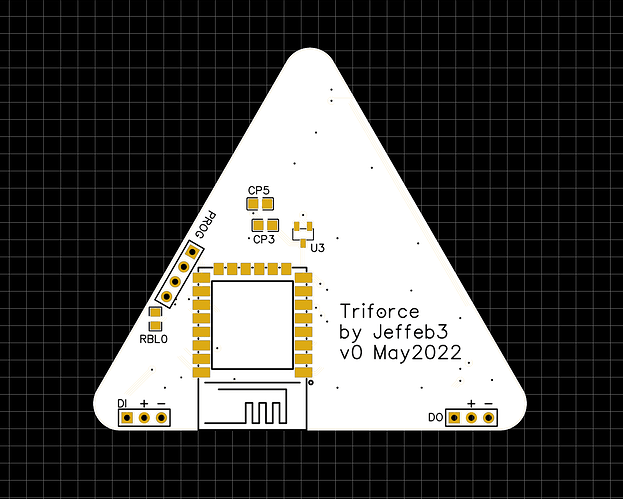 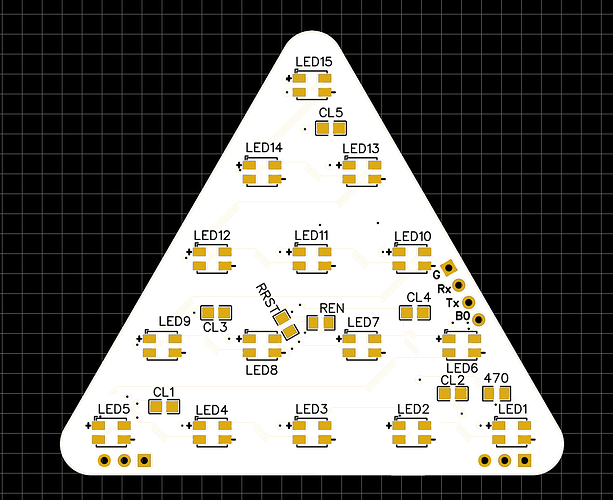 I opted to order it without the holes, and in HASL. I hope I am close enough to get something working. I ordered 5x, and plenty of LEDs for several of them. The PCBs cost $10 and the parts I was missing were $15, including slow shipping (should be less than 3 weeks though).

Wish me luck! If it works, I might order some more. I am also eager to try using just one at a time, even though I designed it for 3. It might be nice to keep it compact.

In my limited testing with cubes and led fixtures , there is no advantage to the MCU being attached to
the leds PCB . As there is room inside the fixture ,it would be good solution to add any shield to the base of the pyramid . I am concern if you make this then replacing the triangle with the MCU in case of a led failure is going to be an issue . In the example below I would just replace one of the sides and still keep the MCU . 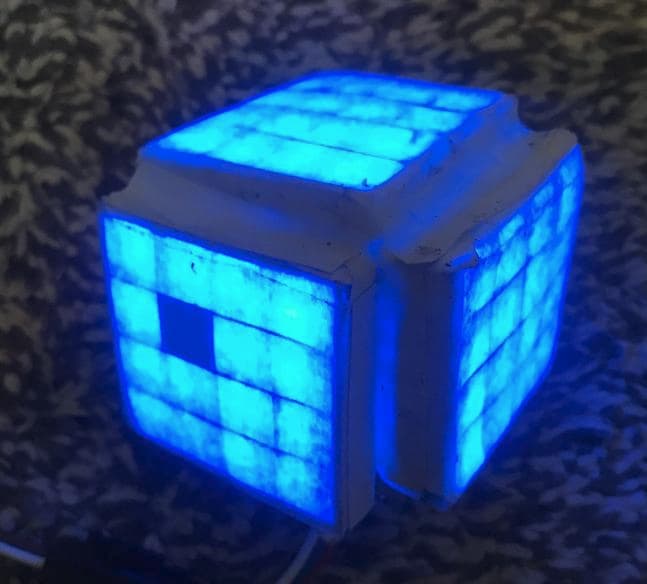 The advantage of having it attached is just fewer wires to make. But I can still use an external mcu. I just wouldn’t install the esp.

I am going to be doing all the soldering myself. No PnP machine here.

Get one of what? Pyramid or PCB?

How is the wifi signal? Looks like you have copper below the antenna.

I haven’t gotten the pcbs yet. I did manage keep the pour away from the antenna. I had a cutout in the board, but it looked wonky. There is an LED there, so there are some traces.

I will let you know when I get it.

Do you have a post about your build somewhere? Are the pcbs available?

(I don’t believe you owe me anything, but those are the details I was curious about).

I would be pretty happy to have a little pcb pyramid on my desk. But one project at a time (haha, yeah right).

Like you I would like to test a little led pyramid .
I am not sure but is it possible to get a pyramid ( with/without an MCU ) without going via PCB way ? like from Serg or other places

I have to check what I have in my storage box. It might happen I have few boards around. Regarding design files, have to check too.

I don’t have another one assembled, sorry. It’s kind of long process and I think it’s not worth it to make production unit. Will be too expensive.